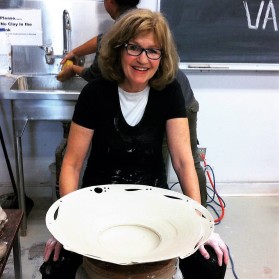 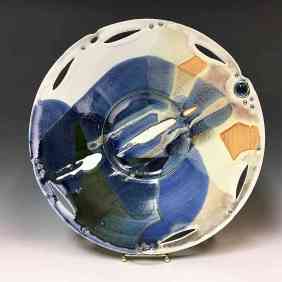 I have added a page on Winnipeg ceramist Valerie Metcalfe to Studio Ceramics Canada. Valerie has been a key ceramic artist in Winnipeg for over forty years. Her work varies from the elegantly functional to the eye-stopping artistic. The sample of works presented will give only a hint of her production but what a hint!

Enjoy the story of Valerie Metcalfe. Let her know how much you enjoy her work. 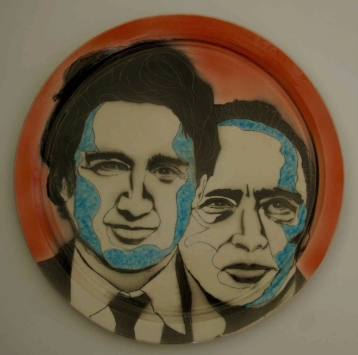 Keith Campbell  continues his commentary on Canadian history and politics with “TOASTING 150” celebrating Canada’s 150th Birthday with the portraits of the 23 Prime Ministers of Canada on porcelain toast. The works are part of a 50 years retrospective, “50 Years in Clay: Still more to Say“, at Jonathon Bancroft-Snell Gallery in London, ON, from Sept 14 to Sept 30th. 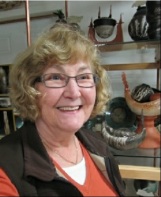 I have added a page on the Nova Scotia Artist, Carol Smeraldo.

Carol is prolific potter and sculptor. Her works in raku and low -fire porcelain frequently incorporate other media. Though varied in style she displays an ongoing love for the sea: an underpinning theme for her explorations in media, design, and more recently,  the cycle of creativity.

Carol is also greatly recognized for her teaching and organizing work in the province: the Halifax Studio School of Pottery, her links with NSCADU, and in the development of the Nova Scotia Designer Crafts Council to name some highlights.

Enjoy the story of Carol Smeraldo’s career and a sampling of her creations,and please share your thoughts. 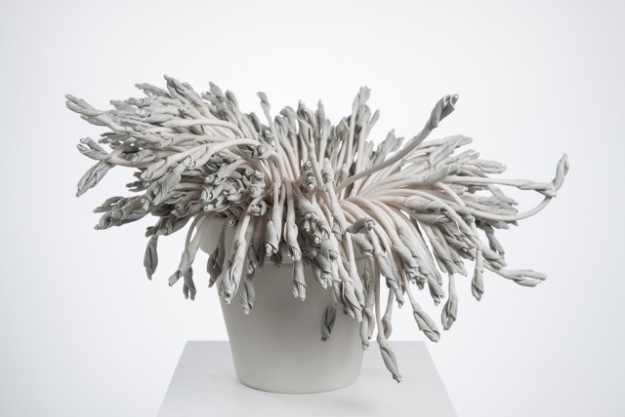 The award was juried by Laura Kukkee, Rory MacDonald and Aaron Nelson.

Proulx will receive $10,000. This prestigious national awards allows early career professionals to undertake a period of independent research, or other activities that will advance their artistic and professional practice at a key moment in their careers. 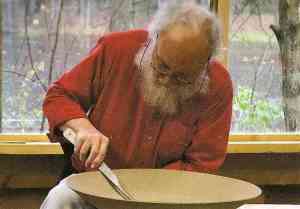 Porcelain master, Harlan House, now has a page on studioceramicscanada.com .

The page will surprise many with the variety of styles and subjects Harlan has produced for almost 50 years. His detailed carving, appliqué and sprigging are familiar; however, there are other deeper messages, opinions and forms in his work throughout his career. His subjects range from the detailed life and beauty in his garden to frustration with the global economy and our “big box” life.

He is open in his thoughts, words and experience. His own website and blog are further testaments to his generosity. 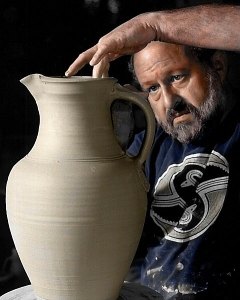 Robin Hopper In His Studio

Robin Hopper’s page was one of the first posted on this website, three years ago.  It is also one of the most visited. A major update is long overdue.  Artists’ pages on the site, their scope, format and content, have evolved, expanded.

Enjoy connecting with one of Canada’s most renowned ceramists, Robin Hopper RCA. 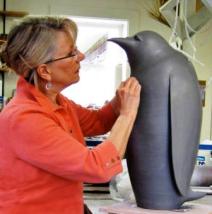 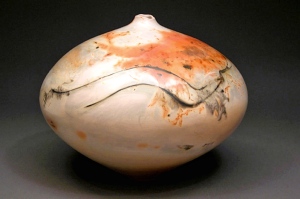 Enjoy the elegant forms and birds and the dynamic surfaces of Canadian ceramist Judy Blake. Judy’s specialty is smoke firing in its many forms: naked raku, sawdust and saggar firing. Tucked away in Lincoln, NB, she is making her presence felt on the national and international scene.

You can also see more of her work on Judy Blake’s  website. 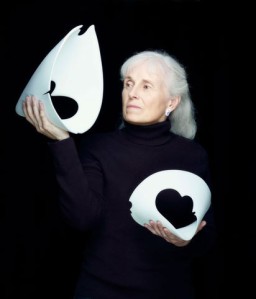 A new page on  Gaspé, Quebec, artist, Enid Legros-Wise has been added to the website studioceramicscanada.com.

Enid’s extensive award winning career and forms of art are internationally recognized. Her explorations have taken her from almost miniature sizes to gallery-filling installations. She pioneered porcelain work in Quebec and has developed major, multi-media, ceramic-based exhibitions.

Stay tuned. More pages are in the works on artists such as  Connie Pike, Stan and Jean Clarke, Luke Lindoe, Brendan Tang, Gaetan Beaudin and many others.

For those of you in the National Capital Region from May 22 to July 19 be sure to visit artist Paula Murray‘s  solo installation exhibition at the Maison de la culture de Gatineau,. The installation of porcelain works will explore Paula’s continuing interest in  the universal principles of interconnectedness. 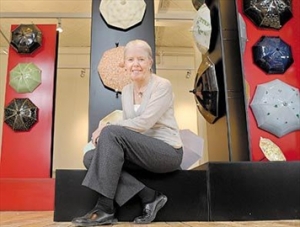 A new page on  Newmarket, Ontario artist, Ann Mortimer has been added to the website studioceramicscanada.com.

Ann’s extensive body of work and long career has spanned the world. Her porcelain works mine the potential of themes from spheres and “bird, bud and fish” forms to plates, cups and umbrellas. In addition, her tireless efforts on behalf of the ceramic world have influenced, students, major artists and organizations around the world.

Stay tuned. More pages are in the works on artists such as Susan Collett, Enid Legros-Wise, Connie Pike, Les Manning, Stan and Jean Clarke, Luke Lindoe, Brendan Tang and many others.

Anyone who has memories or images of these artists they would be willing to share please contact me.