Alma Lorenzen creating one of her famous mushroom works

Ernst Lorenzen at work in his studio 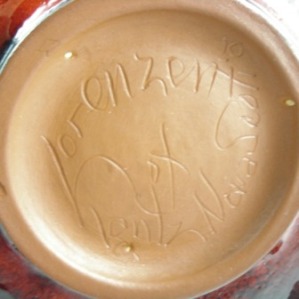 Ernst and Alma Lorenzen are responsible for keeping ceramics alive in Nova Scotia until the 1970s. They are two artists who achieved worldwide renown in spite of their avoiding the limelight.

Ernst was originally a forestry student from Denmark. During the depression years he tried many things including gold-mining. Alma was Acadian French from Cocagne, New Brunswick. She had studied design in Antigonish and done some painting

They originally started pottery in Dieppe, New Brunswick, in 1944. It was all experimental with much  trial and error. It was hard to get any books until they obtained a copy of Leach’s “A Potter’s Book.”

They moved to Lantz in September 1949 after capturing the attention of L.E. Shaw, a Lantz brick-maker, who set them up in a studio in Lantz. They stayed because of the clay. From 1948 onwards they made their living from clay.

Ernst built a wheel after Alma had read an article in “Illustrated Mechanics”. He initially built a kick wheel, and later an electric wheel, for Alma. Alma had trouble centering the clay on the wheel. But while building it Ernst became interested in it himself and enjoyed the throwing experience. But Ernst was throwing pots himself for about eight years before he saw somebody else turn a pot. Thus the originality of their own individual style. Eventually Ernst became the potter, Alma took on design and decoration.

By 1950-51 they came into contact with the Sadowskis working out of the Handcrafts Centre in Halifax with Mary Black. This was a time of “pioneer” spirit, everybody was experimenting, finding out more about the medium. Interestingly during this time they never met Alice Hagen  and they also had little contact with the Deichmanns, meeting only Erica on their two visits to their studio. Although they visited other artists’ studios they never really studied with or under anyone. Their travels took them to New York and Copenhagen among other places.

From about 1946 on they were shipping their work to places such as Banff and the Canadian Handcraft Guild shop in Montreal. They also shipped work to various places in Nova Scotia. Because the shipping and breakage took so much time they eventually stopped and sold directly from their studio.

Initially they used the red earthenware clay from Scoudoc for the early years. After their move to Lantz they used their original small kiln and soon acquired a larger 35.6 x 35.6 x 45.7 cm kiln and larger studio. They were able to use the red clay from the Shaw deposit and later a buff-firing clay from Shubenacadie. They were also able to learn from the staff of the brick plant. Apart from local clays and colouring oxides they relied on commercial supplies for their production. But their experiments in glazes were quite wide: lava from Cap d’Or, Nova Scotia, and apophyllite with an attractive grained texture, dull gold in colour; specular hematite, malachite  and manganese were also used as was garnet sand from Yarmouth and sand from Sable Island. Ernst received a Canada Council grant in 1965 to experiment with native ores in glazes. They travelled to mine sites to pick their minerals and experiment with them. They used local clays until the late 1970s. After that time they experimented with porcelain clays from the Pottery Supply House in Oakville, Ontario. Eventually they used more commercially prepared clays to save themselves time

While they lived and worked in New Brunswick their first kiln was natural gas but the reliability of the supply was inconsistent, often cutting-out after they had started a firing; they switched, therefore, to a bigger electric kiln. Also, during this time they would go out and dig their own clay, digging through three feet of peat to expose the clay. A grey clay, it fired to a golden red at about cone 1 or 2. This excavating was hard work and included hiring a horse and cart to haul out the clay.

With the help of artist Tim Worthington they put together a new gas kiln. Around 1962 they started to work in stoneware in addition to earthenware which they found, “more challenging…more fun than earthenware.”

Their quality of their work and reputation started quickly. The early work was mainly functional initially fired in a 15 x 15 x 15 cm kiln. They started to show in exhibitions quite early on: 1952 in the Rockefeller Centre in New York; with the International Ceramic Association in Ostende, Belgium; and in Trinidad in 1954. Exhibitions, however were not to be the focus of their career.

During the late ‘50s and’60s they attracted media attention with newscasts by the CBC, “The Talent of Hands“ by the Nova Scotia Film Board, and the film “Seeing Nova Scotia Through the Eyes of Artists” Although they did have the movie and newscast publicity, generally the Lorenzens kept a low profile and actually tried to avoid publicity. They sent the occasional work to the Canadian Guild of Potters’ exhibitions but in their own word “We don’t pay too much attention to these things.”  However, their pottery is in collections around the world.

Their early works consisted of small pottery and figurines of birds and animals but perhaps the best known works of the Lorenzens are their mushrooms. Ernst had an interest in them since his earlier forestry day. Alma’s interest in mushrooms began in 1949. After she almost stepped on a mushroom Ernst encouraged her to create a sculpture of one. He had noticed her lessening interest in prospecting glaze minerals and her increasing interest in mushrooms. Fascinated by the shapes and colours Alma created a ceramic model of Horn of Plenty (Craterellus cornucopoides) which she displayed in her shop in Lantz, NovaScotia. Generally a single mushroom took about 15 days to complete from clay sculpture to final firing. This subject was to continue for the next 50 years resulting in thousands of models: Alma preferred gilled species; Ernst preferred non-gilled fungi and included some lichens. But the tipping point was a professor of botany from Laval University, Quebec, who, impressed by the work’s authenticity in colour and size , purchased the work and asked for more. They ended up making more than 200 species of mushrooms. There are science collections of them across Canada and the United States.

Ernst died in 1990, Alma in 1998. The workshop continued until 2005 under their daughter, Dinamarca Lorenzen.