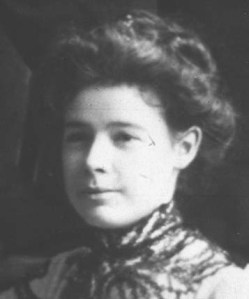 Alice Hagen in her Studio

Hagen invariably painted her signature on the base of her work. These examples read: left, AM Hagen Mahone Bay NS; and right,  A.M. Hagen Pottery Mahone NS.

“Pottery in Nova Scotia means Alice Hagen. There are no professional potters in the province…” 1

Said Ruth Home in 1944 about the stature of Alice Hagen and about the state of Nova Scotia pottery at the time. Hagen herself sits in on of those multiple role positions: artist, designer, china painter, potter, folk artist, teacher.

Much has been written on the Nova Scotia potter Alice Mary Hagen. To say that she was a pioneer inspiration and teacher to later potters is an understatement.

Alice Mary Hagen (nee Egan) was born in Halifax in 1872. She was a china painter first of all but her influence and example resonated throughout the years in Nova Scotia. From a well to do family she was expected to pursue something in an artistic career. Actually her father’s first preference was that she become a milliner. Her first training was in art at Mount Saint Vincent University, Halifax. Later, because of her interest in painting she attended the recently established Nova Scotia School of Art and Design.2

Around 1892 she began to take lessons from an artist, Bessie Brown, from whom she learned the rudiments of china painting. 3

Hagen’s big opportunity came when in 1897 the Canadian Women’s Art Association developed a project with a strong nationalistic flavour, the state dinner service to be housed in Rideau Hall. Hagen (at that time still unmarried and named Egan) was one of the selected artists. Partly because her father was a hunter she designed water fowl plates using her father’s Audubon books as guides. She was commissioned to produce 12 of the plates

In 1898 she had her own studio in Halifax where she taught China painting. In 1899-1900 Hagen is listed as an instructor in china painting in the Victoria School of Art & Design. The style of her studio was probably inspired by the New York studio of her teacher Adelaide Alsop Robineau4

By 1899 she was studying with the famous American china painter Adelaide Alsop Robineau in New York. It was probably here that she also developed her knowledge of lustre ware.5 She might have taken further lesson from Robineau later, in the 1920s. There was always that New York connection.

A consummate china painter much of her work is in Mount Saint Vincent University. The gallery says this of her china painting subject matter: 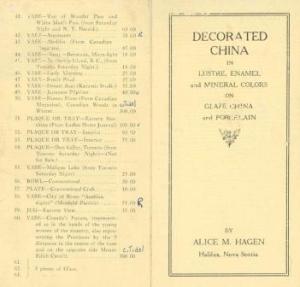 She married in 1901 and her name now became Hagen. She moved with her husband to Jamaica where she continued to teach china painting. She returned to Halifax in 1916 or 1917 where she continued the Canadian development of her career, teaching and exhibiting in Halifax and Toronto. She was a most open artist. Much of her teaching was to school teachers and nuns. Unlike her contemporary Emily Carr Hagen was never wanting for money. She was, therefore, able to teach, create and experiment throughout her life. A catalogue of an exhibition of a sale of her work in Toronto at the Women’s Art Association of Canada’s location shows a range of prices from$5.00 to $325.00, and these were 1919 dollars.7

In 1930 she and her husband went to England and France. It was in France that she visited a site where war veterans were employed making pottery.

When she returned to Canada in 1931 her interest changed from china painting to producing her own pottery. She started to develop her studio in Mahone Bay, Nova Scotia. 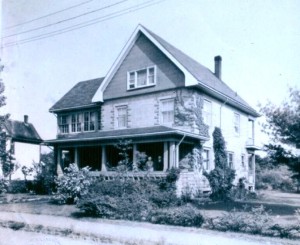 She thus became the first artist potter in Nova Scotia. There was no one around  to teach her. The Deichmanns had not yet set up shop in New Brunswick. She did find a Mr Prescott whose principal production consisted of making flower pots. Because of the nature of his work he knew little about glazes.8 Undeterred Hagen set about exploring local sources of clay and glaze in the Annapolis Valley area. Some of her first efforts  were some experimental plates in red earthenware with a yellow trail slip.9 She also tried other Canadian clays including clays from Saskatchewan 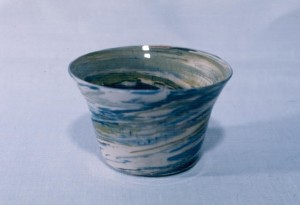 During her stay in London, England it is likely she might have come into contact with agateware.10 Using local materials she developed her own form she called “Scotian Pebble,” using green, white and blue stained clays.

Always experimenting she was still producing work at the age of 93 years. 11 Interestingly although her career spanned so many years there is not much evidence that she was actively connected with other emerging ceramists in the rest of Canada. Her interests seem to have been focused on her home province  and people of Nova Scotia

Homer Lord remembers her a a very strong china painter but not a strong potter. He spent a month and a half working with her in the summer of 1949. Her main interest in throwing pots was to decorate the surface, so she did a lot of casting as well as throwing. 12 One of the things he remembers from that summer was the smell of “lavender oil” in the house from Hagen’s china painting materials.13  By 1949 she had an electric wheel and two oil, drip feed muffle kilns, one for enamel ware and one a Denver Fire Clay kiln. Later she would design her own coke-fired kiln with bricks she made herself.

“When you have no written guide or teacher, you just go to work and try one thing after another until you find out for yourself. After all, what would our world have today if we never tried anything new?” 14

[9] Catalogue “Decorated China in Lustre Enamel and Mineral Colours ON Glaze china and Porcelain by Alice M. Hagen. 1919 Held at the premises of the Women’s Art Association of Canada, Toronto. In the Collection of Mount Saint Vincent University, Halifax, Nova Scotia.