Preferred Clay: BC native clay near workshop in both Notch Hill and Vernon

Much of Ebring’s signature style shows the “where” rather than “who.” His mark, often incised into the base,  is about where he made the pot. The one on the left shows “Notch Hill BC and  could be approximately dated to 1925-1935. Other works show his mark as “Vernon BC”, others as “V-N BC”. These could be dated from approximately 1935 to pre-1954. Interestingly sometimes he used an underglaze signature as in this “Vernon B.C.” signature on the right above.

Ebring was an individual who typifies the development of the Canadian west: he brought his European-learned pottery skills, but firstly tried various lifestyles in farming and mining. He finally established a pottery studio and business, dug out his  clay materials, produced his ware, and developed his markets.

Axel Ebring outside his studio, n.d. courtesy of the vernonmuseum.ca

Ebring, like Peter Rupchan, but unlike Emily Carr was a true western pioneer potter.  Like many in these early years he was an immigrant, from pottery roots in Uppsala Sweden. His father and grandfather were potters. Via a circuitous route through the United States, the prairies and the Yukon he set himself up in the BC interior.  At first he tried his hand at at working on the railroad, mining and prospecting, and then farming in Terrace, BC. 1

He did start producing pots in Terrace but to date I have not found examples of these earliest works. During this last lifestyle period he moved to Notch Hill sometime in the mid-to late-1920s. The discovery of clay nearby inspired him to continue his pottery and to construct a kick wheel and brick kiln. By 1939 he had moved to Vernon to set up his studio in an old brick yard.

Basically, his career can be divided into at least two, possibly three main phases: Terrace (maybe), Notch Hill and Vernon.

It was only when he moved to Notch Hill, BC, that we know he began to seriously, professionally create pots. There was a steady market for his wares. He was able to work here for about ten years.

After about ten years his clay deposit possibly played out but fortunately  a Vernon rancher, Morris Middleton, brought him some workable clay.  There is also the possibility that it was Mrs. Middleton  and other Vernon women who were interested in Ebring’s move to Vernon. 2  On the  ranch was an old brickyard where Ebring purchased two acres and set himself up anew in 1937.  With clay accessible behind his workshop, with a supply of wood conveniently available – opposite on the road from a lumber mill – and an established market, Ebring was back in full operation. The local clay  was a glacial earthenware grey-green gumbo that other potters found hard to work with, requiring a lot of grog.3   He was to stay in Vernon until his death in 1954. His glazes, however, were purchased commercially. He always used kick wheel, wood-fired his kiln, and only used his eye to gauge the temperature of the kiln and the progress of the firing.

His work is mostly functional, wood-fired earthenware.  His preferred wares were bowls, vases and jugs. Buyers especially appreciated his glazes, especially his blue glazes. In his later years arthritis forced to him to work more on producing  figurines.4

His work was widely appreciated, purchased and collected, from Vancouver to Calgary. Like many of the potters of this period his works are hard to date. Most museum collections simply list a 1939-1954 time frame, his most productive period in Vernon, although this might also include works from his Notch Hill phase.

What Others Have Said About Ebring

Ron Candy, Director, Vernon Museum and Archives, quotes from an extensive  June 19th, 1947  article in the Vernon News about Ebring and his work.5 The article is interesting in the amount of technical detail the reporter mentions, including aspects of his technique and equipment.

“…In the small hill at the back of his plant is the clay…There are at least seven different types (clay), all of excellent quality for their various purposes.  Dug from the veins, it is put to soak in tubs of water until about the consistency of cream then put through a sieve with 80 mesh to the inch.  After three of four months of standing to cure in a vat, the clay is ready for use. Mr. Ebring pulled a handful of clay out of the vat, took it into the workshop, kneaded it on the bench to work out air bubbles and lumps then plopped it on the wheel. ‘You have to work with hands, feet and head, explained the potter.’  With his foot he revolved a large disc connected by an axle to the wheel rotating above the work bench.  With his hands held about the blob of clay he brought it into cylindrical shape.  With his head he directed responsive fingers to the proper point and pressure which hollowed out the cylinder and made the sides rise in the beautiful curves of his mental plan.  The shaped vase was complete in about 15 minutes. It was then set off to dry.  It could be set in the sun the next day and dried in about 24 hours, but Mr. Ebring is not in a hurry.  His workshop is lined with forms drying slowly as they await the kiln. 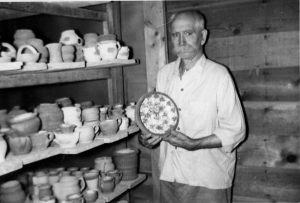 Ebring in his studio displaying his glazed work prior to firing n.d.

This (kiln), as all other tools of his trade, he built himself.  When he has sufficient articles to fill the kiln – a brick oven of about four feet square and high – he is ready to give them the first fire.

Then, for about two days, Mr. Ebring must go without sleep.  The fire must be built up very gradually, to an eventual temperature of about 2,200 or 2,300 degrees.  ‘I have no thermometer.  They use them in factories, but the best thermometer is an old man with enough experience.’

This experience includes controlling the fire even to the point of allowing for the variable drafts caused by the breeze blowing at the time.  All the work is wasted if the gradual building up and dying down of the fire is not delicately graduated.

There are several processes of colouring, too complicated to explain to a newspaper reporter.  Mr. Ebring made it clear that he did not go out and get colours from leaves and roots.  He buys mineral oxides from commercial producers.  Mixing them to get the exquisite colours in his pottery is a secret only because it is a combined art of sensitivity and long experience.

…Colours may be put on before the first firing, before the glazing, or even with the glaze, by processes already mentioned as too complicated to describe.  The glaze goes on as the objects are dipped in a sand coloured liquid coating containing quartz, flint and feldspar, which dries on the object.  Under the next firing, the minerals melt and form the transparent glass surface, revealing the delicate hues which until then had been drab blobs of dull colours.” 6

Ebring’s works like many of the pioneer potters reflect a European heritage  and the need to locate and process his own clay. 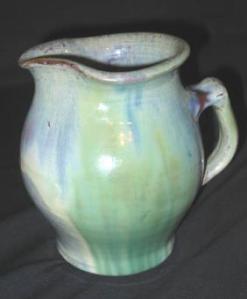 Notch Hill Milk Jug: This milk jug is an earlier work of Ebring’s from Notch Hill and therefore around 1920 to 1939. It has a bright luminous glaze typical of his work. In this case a mainly light blue glaze with streaks of darker blue, yellow-green and white, that all run down to the foot. The shape is interesting in that the spout bellies out from the main body giving the profile a pelican–chinned look. The handle is solidly planted from the neck to just below the waist giving an overall solid weighty, stable appearance. The interior is coated in the same glaze colour giving an overall unity to the colour and form. The brightness of the colours are a constant with Ebring. In the image from the Lawrence collection at the top of this entry notice the spectrum range og glazes and effects.

Plate: This plate by Ebring shows in its simple design a composition that Ebring used occasionally (see the picture above with Ebring displaying his pre-firing ware.) It reflects his simple functional forms and in this case a pattern of green and blue on a cream base. The design shapes are either dabbed on with a brush or sponge. The rim of the plate is simple,  sharp-cornered with a minimal lip  His simple forms found a ready market in the local population who lived far from major urban centres . 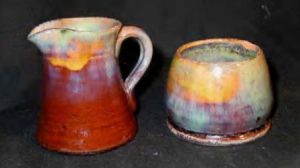 Cream Jug and Sugar Bowl: These simple pitchers are typical of his liking for bright colour glazes, perhaps a bit more rainbow-like in this case. This particular pair is not matched in glaze effects. I do not know of extensive matching sets in his production. It would seem his pieces were individual glazed and fired. Both have simple rims with an indication of the interior glaze matching the exterior. The cream jug has a flat foot, cut right from the wheel. The sugar bowl has a slight indented foot, almost as if it was cut on the wheel. 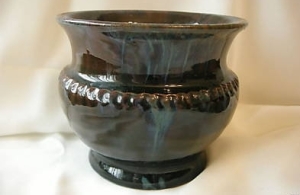 Vase: It would be an error to think that Ebring produced only rustic, or “folkware” pottery. He created  quite sophisticated forms and designs, the latter showing subtlety and restraint. The dark grey-blue glaze is lightly streaked with lighter blue. The neck flares out to a wide mouth  and expands out to a sharp shoulder that is fully ringed around by thumb or finger imprints giving an inverted beaded garland. The waist narrows down to a an articulated foot. The interior glaze reflects the exterior as in many of his other works.

Ebring’s work is much sought after by collectors. Museum collections are extensive but seem mostly to be more opportunistic or piece-meal heritage acquisitions. The two exceptions to this are the Vernon Museum, which naturally has an extensive specialty collection of his work, and the John Lawrence Collection.

Vernon Museum and Archives: Has the most extensive collection of Ebring pottery over 300 works and archives.http://www.vernonmuseum.ca/cr_axel_ebring.html.

Artefacts Canada: This site does not have images, merely a text listing of items: http://www.pro.rcip-chin.gc.ca/bd-dl/artefacts- eng.jsp?emu=en.artefacts:/Proxac/ws/human/user/www/ResultSet&order=native(‘every%20INS’)&w=NATIVE(‘AR%20ph%20any%20”ebring”’)&upp=0&rpp=20

6. Quoted by Ron Candy, Director, Vernon Museum and Archives, from  a June 19th, 1947  article in the Vernon News about Ebring.